The snowy owl (Bubo scandiacus) is a large, white owl of the true owl family. It is sometimes also referred to, more infrequently, as the polar owl, white owl and the Arctic owl. Snowy owls are native to the Arctic regions of both North America and the Palearctic, breeding mostly on the tundra. It has a number of unique adaptations to its habitat and lifestyle, which are quite distinct from other extant owls.

One of the largest species of owl, it is the only owl with largely white plumage. Males tend to be a purer white overall while females tend to more have more extensive flecks of dark brown. Juvenile male snowy owls have dark markings that may appear similar to females until maturity, at which point they typically turn whiter. The composition of brown markings about the wing, although not foolproof, is the most reliable technique to age and sex individual snowy owls.

Most owls sleep during the day and hunt at night, but the snowy owl is often active during the day, especially in the summertime. The snowy owl is both a specialized and generalist hunter. Its breeding efforts and entirely global population are closely tied to the availability of tundra-dwelling lemmings but in the non-breeding season and occasionally during breeding the snowy owl can adapt to almost any available prey, most often other small mammals and northerly water birds (as well as, opportunistically, carrion).

Snowy owls typically nest on a small rise on the ground of the tundra. The snowy owl lays a very large clutch of eggs, often from about 5 to 11, with the laying and hatching of eggs considerably staggered. Despite the short Arctic summer, the development of the young takes a relatively long time and independence is sought in autumn.

The snowy owl is a nomadic bird, rarely breeding at the same locations or with the same mates on an annual basis and often not breeding at all if the prey is unavailable.  A largely migratory bird, snowy owls often wandering almost anywhere close to the Arctic sometimes unpredictably irrupting to the south in large numbers.  Given the difficulty of surveying such an unpredictable bird, there was little in-depth knowledge historically about the snowy owl’s status.

However, recent data suggest the species is declining precipitously. Whereas the global population was once estimated at over 200,000 individuals, recent data suggests that there are probably fewer than 100,000 individuals globally and that the number of successful breeding pairs is 28,000 or even considerably less. While the causes are not well-understood, numerous, complex environmental factors often correlated with global warming are probably at the forefront of the fragility of the snowy owl’s existence. 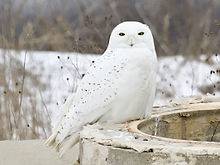 Male snowy owls such as this are particularly distinctive due to the extensive whiteness.

The snowy owl is certainly one of the most unmistakable owls (or perhaps even animals) in the world. No other species attains the signature white stippled sparsely with the black-brown colour of these birds, a colouring which renders their bright yellow eyes all the more detectable, nor possesses their obvious extremely long feathering.

The only other owl to breed in the High Arctic is the short-eared owl (Asio flammeus). Both species inhabit the open country, overlap in range and are often seen by day, but the short-eared is much smaller and more tan or straw-coloured in colouration, with streaked brown on the chest. Even the palest short-eared owls conspicuously differ and are darker than the snowy owl; additionally the short-eared most often hunt in extended flights.

More similar owls such as the Eurasian eagle-owl and the great horned owl attain a fairly pale, sometimes white-washed look in their northernmost races. These species do not normally breed nearly as far north as snowy owls but overlap certainly does occur when snowy owls when the latter owl sometimes comes south in winter.