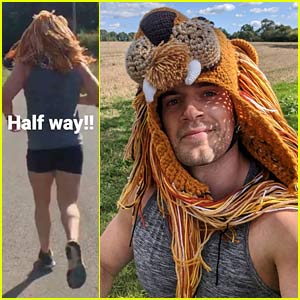 Henry Cavill is an avid supporter of the Durrell Challenge and he just completed the virtual run while wearing a lion hat!

The 37-year-old Enola Holmes actor participates in the charity event every year and this time, the 13K race had to be held virtually due to the pandemic.

The Durrell Challenge supports the Durrell Wildlife Conservation Trust, an international charity with a mission of “saving species from extinction,” especially those animal species that are under-threat and overlooked.

Last week, Henry told fans, “To protect the health and the jobs of my fellow cast and crew here on The Witcher, I’ve decided to err on the side of caution and stay local to do my very own Durrell Challenge, rather than travel to Jersey. Saturday will be my day!”

After the run, Henry shared a photo of his beer. He wrote, “Oops! Our route just happened to finish right next to a pub. Would be rude not to…..”