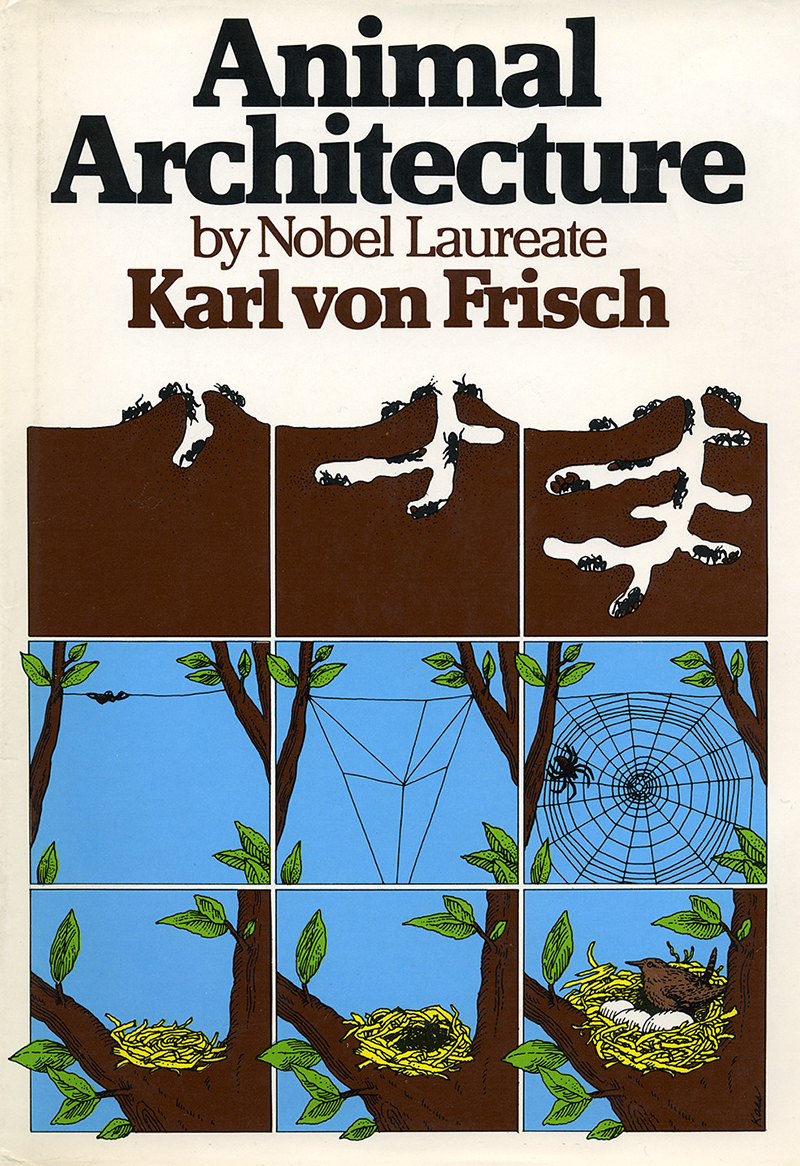 The creative building activity of animals of all species is surveyed in text, drawings, and photographs in this fascinating work by one of the most eminent of animal observers. With an unrivaled grasp of his subject, Professor von Frisch unfolds the marvels of instinct and inventiveness among insects, fish, birds, and mammals. Much earlier than human technicians, termites created systems of air conditioning, dug wells to a depth of 120 feet, and built central cities with satellite suburbs. Wasps may have shown the Chinese how to make paper. Bowerbirds decorate their nests with the aesthetic sense of a painter. Animals have ingeniously used stone, wood, reeds, clay, and wax as building material. They have devised hinged doors, traps, shelters with overhanging roofs, cells with waterproof lining. The precision of their architecture frequently surpasses that of humans.

Karl von Frisch, a pioneer in the science of ethology — the comparative study of animal behavior — was awarded the Nobel Prize in 1973. His career began with the study of bees and culminated in his discovery of their mode of communication. He is the author of The Dancing Bees: An Account of the Life and Senses of the Honey Bee. Professor Otto von Frisch, his son and collaborator, is the author of Animal Camouflage and Animal Migration.

A couple pages in Jean Dethier’s The Art of Earth Architecture, which I featured a few days ago, are devoted to “animal architects”: birds using earth to make nests, frogs building ring-shaped nests along shorelines, and crabs building vaults with sandy earth, but also — most remarkable, by far — termite mounds that reach heights of around 20 feet and have internal passive ventilation systems for optimum temperature and humidity. With just two pages among 500, that book can only touch upon how animals build shelters in stunning ways; ways that are sometimes aligned with human dwellings. People wanting more in-depth explorations of animal habitats should pick up Karl von Frisch’s classic Animal Architecture, published in 1974, one year after he won, along with Nikolaas Tinbergen and Konrad Lorenz, the Nobel Prize in Physiology or Medicine “for their discoveries concerning organization and elicitation of individual and social behavior patterns.”

As von Frisch writes on the first pages of his book, “this book will be devoted to the activities of animals that actually build structures of the greatest diversity … using techniques akin to those that humans employ in masonry, weaving, plaiting, digging, and so on.” While here he points out parallels between the built environments of animals and humans, his book is devoted purely to the innate creations of some bugs, birds, and mammals. It is split into two parts: Arthropods and Vertebrates. Von Frisch devoted most of his career to studying bees, and accordingly they take up a large chunk of the first part. But so do wasps, ants, and termites, the last of which he calls “masters in building and civil engineering.”

Termitaries can be occupied by millions of termites, their oxygen consumption leading to suffocation over a half-day’s time without proper ventilation. Through drawings, von Frisch explains the chambers, air spaces, fungus gardens, and structural supports that enable the termite mounds to stand up and vent the air automatically. But he also shows how termitaries in Australia (third spread), for instance, differ from those in Ethiopia (fourth spread); such variety is even evident when comparing the termite mounds in East Africa with those in West Africa.

And while von Frisch focuses on the biology of creatures and the science behind their habitats throughout Animal Architecture, he also touches on the social aspects that allow such complex organizations. This draws further parallels with the dwellings of humans and makes me think that architects interested in biomimicry will find plenty of useful information in these pages, both in words and images: the former detailed but accessible, and the latter comprising photographs and drawings. Though given that this classic book is nearly 50 years old, I’m guessing most biomimicry-minded architects already own it. 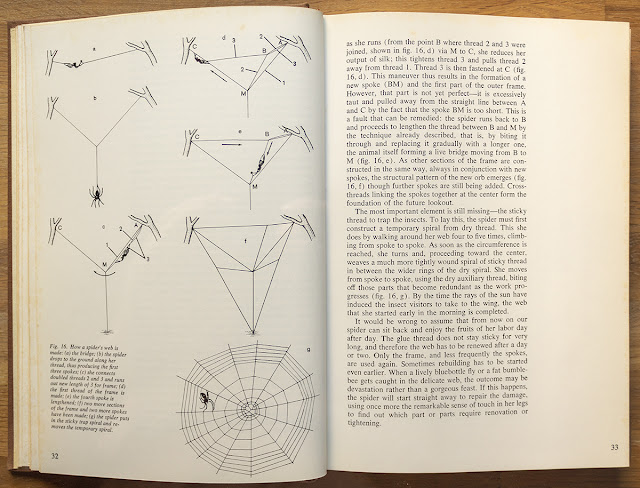 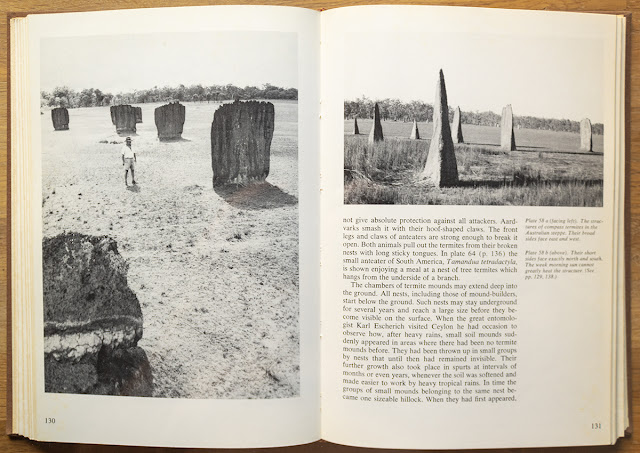 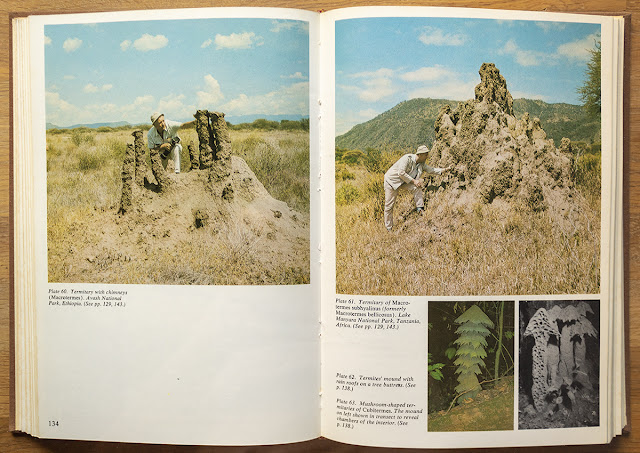 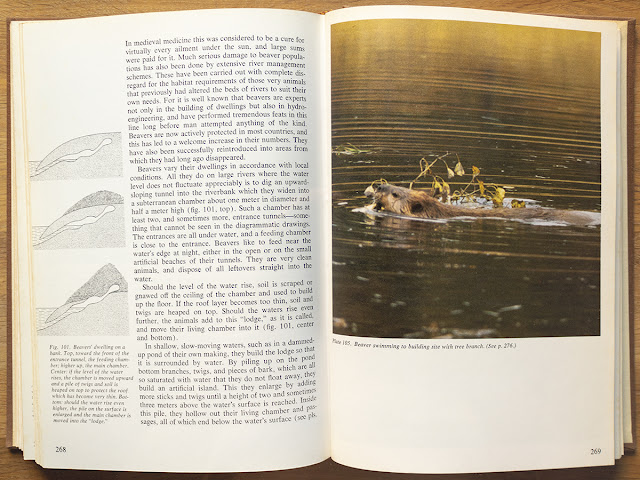